EC President delivers the Recovery Plan in our Science Park

Bratislava, 21 June, 2021: The President of the European Commission, Ursula von der Leyen, returned the approved Recovery Plan to Eduard Heger, the Prime Minister of the Slovak Republic, in the Science Park of Comenius University. Several green and biomedical scientific projects were presented to her as part of a general presentation of Slovakia. They included Sensoneo, Ecocapsule, Espio, GA Drilling, Go Space, MultiplexDX, Geneton and Glycanostics.

She was met in the Science Park of Comenius University (SP CU) by CU’s Rector, Marek Števček, and the Vice-Rector, Jozef Masarik, who is also an acting director of the SP CU. Several of the presented projects were funded by the EU and illustrate the priorities of the Recovery Plan.

The Prime Minister said this day was an important milestone for the Slovak Republic. One year ago the EU launched the NextGenerationEU programme in response to the the pandemic, intending to help EU member states to address the consequences of the crisis. "Today we witness the launch of its implementation. We want a European Union which is stronger, greener, and more digital," said Prime Minister, Eduard Heger.

Slovakia was one of the first five EU member states to submit its Recovery Plan. The European Commission set aside €800 billion for recovery, making this one of the largest recovery plans ever. Slovakia will receive €6.3 billion.

"It was fascinating for me to hear about the activities of scientific enterprises which use the innovation and talent of your researchers," said EC President, Ursula von der Leyen, at CU’s Science Park. Her visit to Slovakia lasted several hours, during which she and EC Vice-President, Maroš Šefčovič, met with Prime Minister, Eduard Heger, and the Slovak President, Zuzana Čaputová. 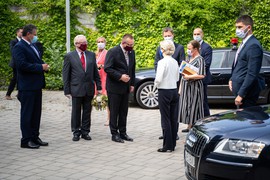 The President of the EC, Ursula von der Leyen, was welcomed by the Rector, Marek Števček, and the Vice-Rector, Jozef Masarik. Photo: Tomáš Madeja 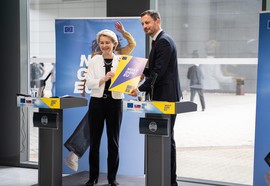